I know, I know... I have stooped so low as to jump onto the band wagon of that ole Cash Cow, Paula Deen. As we all know by now, the southern celebrity chef has announced she has Type2 diabetes and is a spokesperson for a diabetes drug. I felt as though I had to go there along with everyone else and blog about it when D and I had this breakfast for the 2cd morning in a row (I have it frequently but it has become his new favorite). It is a true twist on an old southern favorite ingredient: Grits!

Here is the back story (there is always a back story with me). While my good friend Deb was visiting we took a trip to Morse's Sauerkraut.

It was a snowy winter day (long before Deen's announcement) we decided to go out for a country drive. I had never been to Morse's although I had heard much about the wild and wacky things they sell in the shop which is attached to the restaurant which is located in the middle-of-nowhere, right next to our home, beyond Hope, in Appleton, Maine. I thought it might be a fun adventure on our drive. Among many items available in the shop which I did not consider to be food items I saw ONE THING I wanted to purchase with a burning desire; Organic Stone Ground Grits in beautiful white cloth bags. So what are grits you say??? Well I could not explain grits any better than the woman who penned an entire Southern Living Cookbook about them: Glorious Grits, America's Favorite Comfort Food by Susan McEwen McIntosh.  Here is an excerpt from an old Pittsburgh Post-Gazette article reviewing the book:


"They're corn, of course. In the stone-ground method, "corn passes between two granite stones that crush and grind the grain slowly, generating a lower temperature than occurs in modern milling," writes Mrs. McIntosh in "Glorious Grits." Roller-milled grits results in a product with a longer shelf life, but vitamins and nutrients are lost.
Specifically, stone-ground, whole-grain grits maintain the high-fiber bran, or hull, "which is rich in antioxidants and B-vitamins," she writes. The germ, just under the hull, also contain B vitamins, protein and healthy fats, and contributes flavor.
The remaining endosperm is carbohydrate-rich but lacks nutrients offered by corn's other components. Factory-milled products generally remove the bran and germ, good for the producer, not so good for the consumer, Mrs. McIntosh writes.
Stone-grounds grits, because they maintain the fibrous components of corn, "are more coarsely textured. They take 20 to 25 minutes to cook" with an "improved texture, heartier in how it feels in the mouth, and retain the flavor of fresh corn," she says.
They also have to be cared for more gently than roller-milled grits. Keep them in the refrigerator.
Polenta, probably better known up North, is made from the smaller grindings of corn and cooks more quickly than grits. Keep the grinding going and you'll get cornmeal, which is flour-like.
Then you can get into color: Blue, white or yellow -- there is a rainbow of grits, cornmeal and polenta."

Now Here I am in a YANKEE shop dedicated to European sausages, sweets and Kraut with a very Southern Lady and we find a bin full of Organic Stone-Ground Grits. Why would a shop here in the middle of nowhere Maine have such an item and how on earth we found these grits, I mean look at the images of that shop on the website, it was chock-a-block full! Of course we had to purchase and eat them!?? Grits are an acquired taste which took me years of living in the South to acquire, which magically happened for me right after my grits-loving (god rest his soul) husband died of cancer! It really even used to gross me out to watch people eat them. We get back home with the grits and then Debbie asks with a very worried tone in her voice "what in the world are we going to eat with our grits if we can't have eggs????" We had collards and fakin bacon and it was Fantastic!!
Then I introduced this combo to David upon his return from a shoot and it was such a big hit that he wants it everyday in place of any oatmeal.
Broccoli with Lemon, Hummus and Grits! 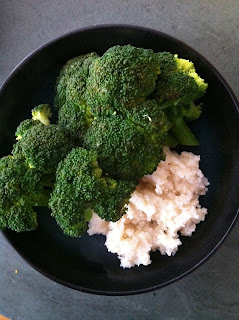 Paula Deen would do well to eat this powerhouse breakfast! The 1/2lb. of broccoli lightly steamed with a squeeze of lemon has 77 calories with less than 1g of fat BUT has nearly 7g of protein, 0 cholesterol and 6g of fiber, this is just the Broccoli. The Grits, cooked with only water have 150 calories with 0 fat, 0 cholesterol, 4g of Protein and only 1 g of fiber (hard to believe only 1g!) We added a tablespoon of low-fat hummus and some Sriracha sauce which adds another 40 calories, 1 g fat and 2g each protein & fiber. With all of the fiber and protein in this meal I'm not too worried about the carbs and I don't think Paula with her newly announced diabetes would be either, especially if she is taking her drugs. To read about Grits and Diabetes click here.  One of Deen's recipes for grits contains 252 calories, 0 fiber (she uses instant or quick-cooking grits) and 102 mg of cholesterol!! see Paula's recipe here. 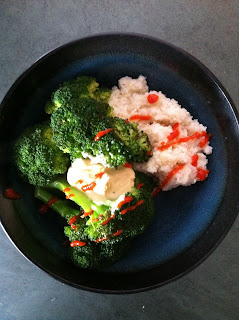 There is really no need for a recipe, is there? Serves 2: You just steam a lb. of broccoli until just tender either in the microwave or stovetop and squeeze 1/2 lemon over it after cooking. Making the grits might be more challenging as you must first find some organic stone ground grits. The article from the Post-Gazette tells you how to do this. Cook them much like steel cut oats 2 - 1 liquid to grits and stir like risotto, adding liquid as needed. I use some low sodium fat free veggie stock in place of water too. Plop a tablespoon of low-fat hummus on top of the hot broc and add a bit of hot sauce (a natural with grits) and Enjoy! You could easily have grits and eat them Paula, but leave off the eggs, cream and butter :-)