Just a quick post today to let you know what I have been up to this week. For a few days, I jumped back into my old life and was the Production Assistant on location with Magilla TV, shooting what has become known as "unscritped" or reality television. We were filming a segment for a series I believe will be known as Family Secrets but I am not totally sure of the title, neither were the rest of the crew. This is a sign of the real change that has taken over television in a not so positive way, in my opinion, however, this story is one that will really warm your heart.

I met the rest of our crew of 3 early Monday morning at the home of Randy Joubert and his wife Jen. Our crew consisted of myself, Ryan Heilman the producer/director and Cory Richardson the cameraman. David is away in New Hampshire shooting some other "unscripted" TV. I think this is the first time both David and I have been working in separate locations for two different shoots!

Until I "googled" the name Randy Joubert, I had no idea what I was getting myself into. This was a last minute call from a production company in NYC and they would not give me any details, true to the style of shooting these days. As I am sitting outside of this guy's house, waiting for the rest of the crew, I find I am familiar with his story because I had seen it on the TODAY show a couple of years ago. Because Maine is one of only 8 states to change the "access to adoption records" laws, four siblings are re-united, each one having looked or wondered about their birth families for many years.

Two brothers, working side-by-side at DOW Furniture for months before they discovered they were brothers. One sister hears of the discovery and realizes she is their sister! So the Today Show calls up, had the 3 siblings, residents of Mid-Coast, Maine come to NYC to appear on to the show. While the show was on air, a fourth sibling, another sister, phones from Florida! She never even watches the Today Show but just happened to be channel surfing and saw the story when she realized these are her brothers and sister! Isn't it amazing?? Well, it is so amazing it still generates interest 2 years down the road! We followed the Today Show story pretty closely, filming the brothers at the furniture company where they work, interviewing the sister who lives locally and flying the sister from Florida up for an interview.


I cried as I listened to each of their stories.
Visit msnbc.com for breaking news, world news, and news about the economy
It was an emotional but fun couple of days. We filmed on location at Dow Furniture, in downtown Waldoboro and at Randy's house. The brothers and sisters in tears and happy to see each other. Randy and Gary spend a lot of time together, of course as they work together, but the sisters are not as close. We looked over photos from the past, listened as the 4 pieced bits of their personal stories together for the camera. It was very moving and so unusual how it all came together. Only in Maine! Now its back to the kitchen and off to the Maine Vegetarian Food Festival! 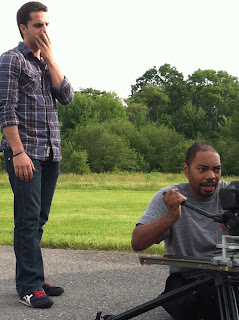