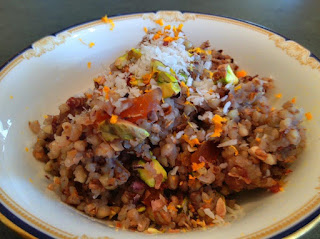 B is for Buckwheat. B is for Breakfast!
Ever since we set our clocks ahead to spring forward, I have been feeling a bit left behind in the mornings, not adjusting easily to the change. My body wants to stay in bed and the weather in Maine has been less than Spring-like which adds to my desire to pull the covers up over my head for one more hour! This morning when I forced myself up and out at 8 a.m. (really still 7!!) I knew I needed something really different for breakfast.
The last few weeks we have been enjoying this Morning Comfort Drink which is a chai-like combo made of Dr. Fuhrman’s delicious Almond Butter, Turmeric, Cardamom, Cinnamon, Pepper & a couple of Dates whizzed up with some water in the Vitamix until it's hot, or you can heat in a saucepan as shown and then blend. Sometimes we add other additions such as flax meal or brazil nuts. (recipe below)


Today had to be different. I had a morning meeting and not much time to sip leisurely.  I needed something to hold me over all morning. I looked into the pantry and the first thing I saw where some Buckwheat groats, and behind that, some Kasha (toasted buckwheat groats). 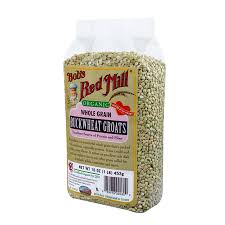 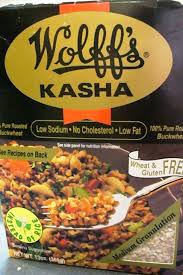 I decided to try the Kasha. I’d been holding on to it for quite some time so it deserved using.  Rather than being a grain, buckwheat is actually the hulled seed of a fruit similar to rhubarb. I have made many delicious salads with the regular buckwheat groats, used them to make Rejuvalac for culturing my non-dairy cheeses and of course I use buckwheat flour for pancakes and waffles and soba noodles (made from buckwheat flour) often. Buckwheat flour is gluten free and contain 4 times more fiber than whole wheat flour.  Buckwheat is also a very good source of manganese and a good source of magnesium, as well as flavonoids like quercetin and rutin. The protein in buckwheat is a complete protein, containing all eight essential amino acids. Having never made a porridge from either kasha or buckwheat groats I’d say it’s long overdue wouldn’t you? With eastern influences already running around my head from the past few weeks of chai-spice liquid delight, I decided to follow through with the kasha and flavored it using similar spices. It turned out amazing.  I can’t wait to try it in the Nissan thermos David has ordered for me to use in the overnight method of cooking grains (and seeds like Buckwheat) more on that in a later post.  Here is the recipe for this morning’s Fast-Break; Buckwheat Breakfast, Enjoy! 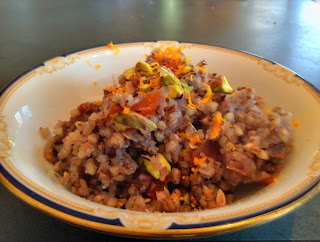 Method:
If you are using a high-speed blender, blend all ingredients until warm.
You might want to avoid using whole nuts, seeds and peppercorns if your blender is not capable of a fine puree.  If using a traditional blender, blend altogether until well mixed and then transfer to a saucepan and heat through.