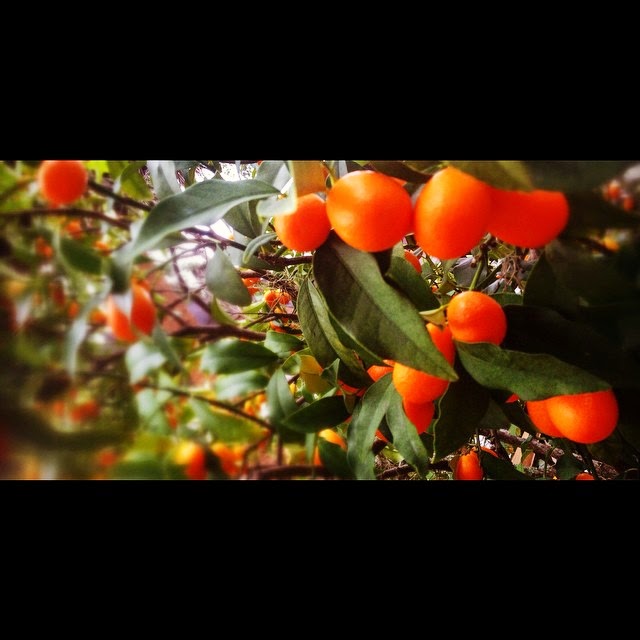 When life hands you kumquats, you make kumquat marmalade, right? I know, you are thinking "this stuff has tons of sugar" and you are right! But there are those times when a little bit of sugar might just sweeten up your day. I use so little jams, almost no jellies, and very rarely do I spread marmalade on anything, until last week.

Finally over the jet lag from our recent trip, we have been getting outside for walks together as much as possible before D heads off on another filming adventure. We were walking by the beautiful courthouse square in our town and saw a kumquat tree heavily laden with fruit. The tree was growing in the garden of a fantastic Carpenter Gothic Victorian home which is acting as a law office. I couldn't resist going in and asking if I could take some of the fruit in exchange for a couple of jars of what ever I might make with it.

I knew immediately it would be marmalade, something I have only made once or twice before, mostly because we do not eat it much. The people at the law office were more than happy to give us the fruit as well as a bag to put it in so we started picking! Happily walked away with about 3 lbs of kumquats! I pondered for a moment but quickly realized, I had JUST the right recipe!

While we were on the Silver Discoverer, I met some really great people from many places including Lyn from Australia, Christina and Chris, both from New Jersey, in fact, Chris and I were both born in the same NJ hospital! These folks were my buddies on zodiac trips, through many lectures, and in the evening for recap cocktails and dinner on countless occasions - THANKS GUYS, I am forever grateful to you all for luring me out of my shy-self and without y'all there, I might have been locked in my cabin, which we know would have ended badly!
Back to the recipe. On Christmas night, we were visited by Father Christmas, who made the rounds with gifts of candy for all. When he laughed his way to our table I was so excited to see it was one of my newer acquaintances, Dr. John. He asked  if I'd been naughty or nice this year, of course I answered "naughty" and we instantly bonded.
We had only met very briefly and little did we know at this point we both share the love of food. Yes, Father Christmas/Dr. John & I are passionate FOODIES! After Christmas, Dr. J would begin to show me images of his prize-winning jams, Madeleine cookies, and more, while I drooled. We compared our love for the Australian Woman's Weekly Guide to Preserving, all things Maggie Beer, Stephanie Alexander and more. Dr. J affectionately (for the love of food, not necessarily for me...) scribbled notes and tips, web addresses and titles of books about everything from food to music on scraps of paper during our conversations. I urged him to do this for me so I could remember it, after all, I do suffer from CRS! I also love to read recipes which were hand-written by someone and lovingly think about that person while reading & cooking the recipe.
Then, one day, John gifted me his award-winning method for making jams, jellies and marmalade IN THE MICROWAVE! I thought perhaps, being the trickster that he is, maybe he was leading me a stray...

He carefully wrote the step by step instructions for making microwave jam, in small batches (about 3 cups or so at a time, depending on the bowl and microwave strength). I knew I would have to try this
as soon as it seemed the right opportunity, which I presumed would be next Summer, in Maine, when I have access to an abundance of fruit. Little did I dream I would find a bumper crop of one of the very fruits we discussed, Kumquats (also spelled cumquat) right in my own backyard, for FREE! I purchased some kumquats at the grocery store in November to garnish the dairy-free cheese platters and they cost about $6 a pint!
I double checked some other favorite jam-making books to compare recipes, I still could not believe I would be making jam in the microwave! I decided to make one batch in the microwave and one, more traditional, using Beverly Sutherland Smith's recipe shown here:

The cost of the Drambuie, which I simply had to use in both recipes, made up for the savings on the fruit! $25 for a pint!
Here is the recipe Dr. J sent when I emailed regarding Kumquats specifically. I wanted to be sure they would work as well as any fruit:

MICROWAVE KUMQUAT MARMALADE (or any other fruit jam) a la John.
Both batches turned out really nicely. I modified Beverly's recipe by using less sugar. I only used 1 cup sugar - each cup of fruit, as in John's recipe, and I did not use any citric acid in the stove top batch, which John's recipe called for at 1/2t. Citric acid per cup of fruit. I actually found the stove top batch to have a slightly better flavor and consistency but then John mentioned in another email, he doesn't hesitate to add a bit of boiling water to bowl during the  boiling process if the mixture is looking too "gummy". Here is John's advice:

John has won First Prize with his orange marmalade so I trust he knows what he is talking about!!


Good Luck making your first batch of microwave jam! If any questions, please email or leave comments below!